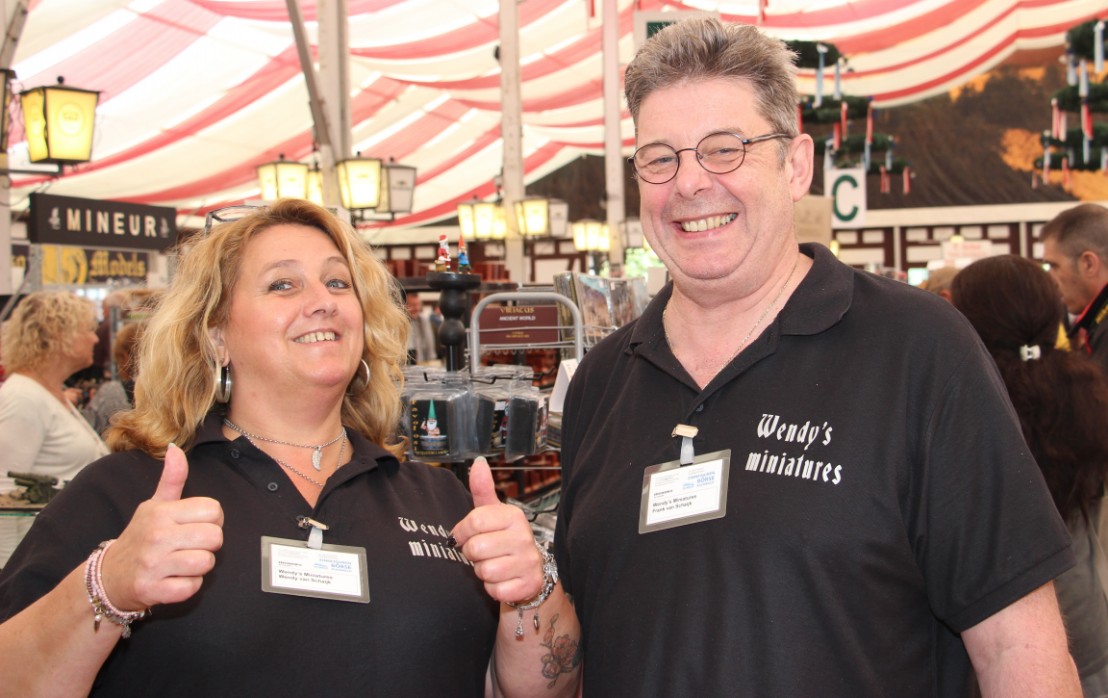 Anyone visiting one of the many model exhibitions in Europe cannot miss Wendy's Miniatures. Since the founding of their webshop a few years ago, Frank and Wendy have gained a central place in the  world of miniatures.
Who are the people behind Wendy's?
We, Frank and Wendy. have been a couple for 30 years with the common passion figure painting and are based in Soerendonk, between Eindhoven and Weert.
Why did you start with a miniature shop?
The beginning is a typical case of being in the right place at the right time. I (Frank) was looking for   figurepaint and met a salesperson of Andrea miniatures. I spoke to him and we got enthusiastic about the idea of starting a shop of my own. Next day I got a proposal of him to start a store. We started shortly after that, March 2015.
I do not think it's easy to set up a miniaturesshop
True, it is not easy to set up such a thing because the painting of figures is relatively unknown and the offer overwhelming. First and foremost you have to find your place.

Were you already dealing with miniatures before?
I, like many youngster, built model tanks and was honestly not so familiar with figure painting itself, but again, when I met Andrea and saw all the miniatures I was convinced this was the most beautifull hobby. Wendy has come to know the hobby through the store but has developed into a very good painter in the short time that we now exist.

What do you do for sales: shows, website, perhaps more activities?
We think that you can’t do it alone with a webshop  and that is why we are present at 25-30 trade fairs a year. You have to stay in  touch with the customers.
Do your customers mainly come from the Netherlands?
The majority of our customers are Dutch, but we have customers from Belgium and Germany as well.
What kind of miniatures are the most popular?
The more static figures like the umpteenth knight, French soldier on guard, are passé, and that more attention is paid to the action-pose of a figure. The "other" figures such as caricatures are also very popular at the moment.
Have you seen developments?
The more Cartoon-like miniatures with their lord of the ring figurines in rat form (figures that are depicted as animal rats) are becoming more and more popular. And also miniatures that form a complete vignette.
Do you have certain brands / figures / genres that you prefer?
Wendy focuses on the Cartoon characters. I myself have a slight preference for busts. We also paint them ourselves because you cannot sell something if you have nothing to do with it yourself.
What are the plans for the future?
The plans for the future or rather the hope is to be able to open a physical store once and then be able to offer a very wide assortment of all kind of miniatures.
How do you see the future of the model figure?
At the moment the manufacturers of figures are booming, partly due to the 3d printing. But I think that the old-fashioned casting is still preferred by many people. The same applies to tin / metal that is still preferred to resin. We have customers who really do not want plastic. The only real problem I worry about is that the hobby is aging and that there is not much new growth. Something really should be done about that.
More information:
Wendy's Miniatures has an extensive website: www.wendysminiatures.nl