×
Go to content
×
The music bands of Walt Bettonville 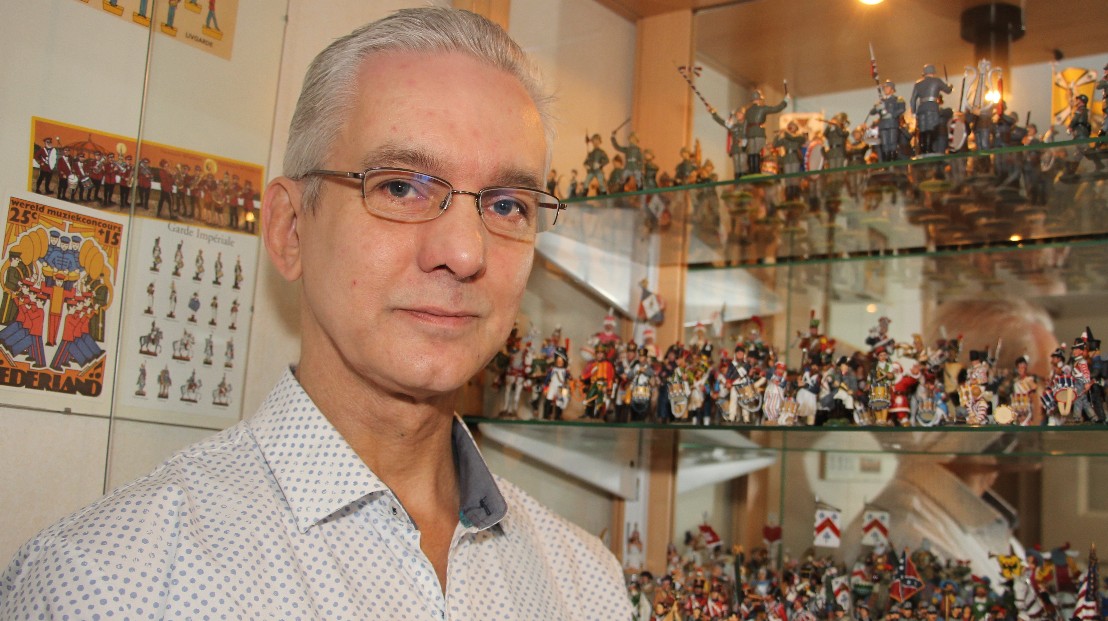 Sometimes people manage to combine two passions. A good example of this is Walt Bettonvil from Leiden, the Netherlands. He knows how to bring his passion for 'real' music bands and the collectig of figures together.
Admittedly, it began with the passion for playing in a music band. Walt wanted to play as soon as he was old enough to walk. He had to wait until he was five years old, but from that age on the music band and everything involved never disappeared in his life.
As a percussionist and later tambour-maître, until recently, he has been active for many years. In the early sixties he got also his first miniatures. A dozen plastic musicians that he could play with endlessly. A set that he expanded over the years but lost in the long run.
The Start
For Walt you can really see 1996 as the start of the collection. In that year he entered a toy store in his hometown Den Bosch where a complete pewter orchestra from the firm of William Britain was for sale. The orchestra, the Royal Anglian Band, was bought without hesitation. It was the start of a collection that is expanding to this day.
In the box was a card to become a member of the William Britain collectors club and its membership ensured that special figures and sometimes also entire bands could be purchased. While searching, Walt found, especially during holiday trips, more and more, and found out that there are quite a few different companies that bring music bands, or parts of them, to the market. A well-known firm, for example, is Preiser, which issues complete, sometimes very extensive, bands in the scale HO (for trains). Part of the collection is therefore made up of (plastic) figures from this company. In these years the collection grew with about 2 to 3 bands a year.
Internet
the internet gave a new dimension to collecting. From 2005, when the worldwide web was established all over the world, the range of orchestras went up enormously. There are new and older firms of figures that have the whole world as a market. Everywhere there is something to be found about the theme of music bands and figures. Walt can quickly buy his first American band and expanded his collection with brands he never heard of. The hobby is international, and so is his collection. It now consists of approximately 2,600 individual figures, whether or not part of a band.
Wide collection
The collection is very diverse. The miniatures are plastic, pewter and even some old paper figures. The scales are also diverse, though the majority consists of 54mm and the smaller HO figures. Usually it concerns full orchestras but there are also some individual figures, with of course an instrument in their hands. The historical periods are also diverse. The post-war period predominates. But there are also some Roman musicians and a very nice set of marching SA musicians (King & Country), medieval players and a band of the Napoleonic era.
Own website
All figures are neatly arranged in several display cases. But they can also be seen by others through the special website that Walt has built. here almost all figures and bands can be seen. See muziekkorpsen in miniatuur