×
Go to content
×
The strange world of Cliff Sanderson 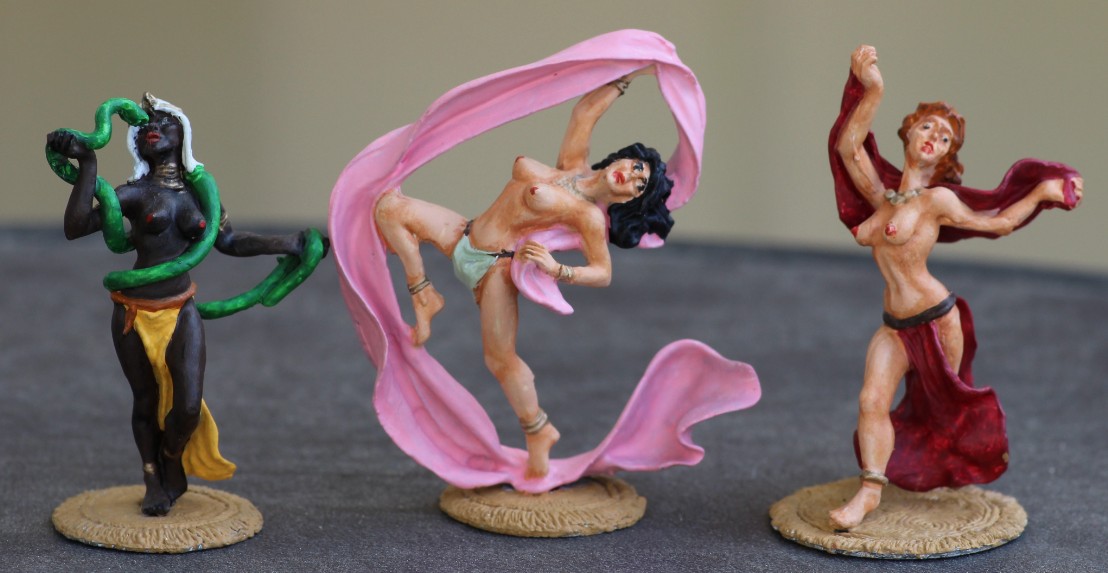 The name Cliff, or better Clifford, Sanderson will probably not let ring a bell to most readers of this website. Still, Sanderson was a name in the model miniature world that mattered in the 70s and 80s and still has some reputation among a limited group of collectors.
Directly at the start of first figures of Sanderson there was quite a bit of confusion as to who the real creator was. Sanderson, after making a few test figures, was commissioned for several soldiers from the 2nd World War. The how and why he got this assignment can not be traced anymore. In any case, the client, a certain mr. Robinson, made the mistake by first calling the maker 'Saunderson' and later correctly, 'Sanderson'. The result is that there are still some Saunderson and Sanderson figures in circulation, which have been made by one and the same person. After these first figures Sanderson n the following years made a lot of, but not exclusively, 54mm figures.
Work for several companies
oon after the first figures, he made some First World War miniatures. Followed by Highlander and a trumpeter of the guards. Especially this last figure was popular. Then followed some series that made Sanderson more or less famous in the small world of collectors. .
He made a first series of Romans in the early 70s. These were slaves and slave traders with whom he set the tone for much of his later work. Sanderson figures were very detailed and expressive. He is called the first person who made figures with a real expression in their faces. Figures look at each other, interact and have a life like expression.
Another feature that develops at Sanderson these years are the many (feminine) nudes and the often violent portrayals. In almost all his series, whether they are historical or the fantasy, a certain fascination seems to be present for violence and sexuality.
Sanderson made figures for, among others, the companies Monarch, Greenwood & Ball, Acorn and especially Hinchliffe. He also produced figures under his own name. These can be recognized by the brand name 'Sanderson miniatures' at the bottom of the footplate. Figures that were often published under a different brand name so that it is hardly possible to get a complete picture.

A lot of themes
The first real series was the above-mentioned Roman slave market. Then there followed many other, sometimes very extensive series. A beautiful 16th century inn series, gladiators and a so-called 'press gang'. A large 19th century group in which the recruitment of sailors was portrayed. His pirate series is characterized on the one hand by the cruelty mentioned above, on the other hand there are figures in this series that can be called slightly humorous like the pirate wedding. Certainly no humour can be discovered in his series the 'sack of Rome' with murderous, robbing and raping Goths. Extremely strange is his satyr series with satyrs that abduct women, chasing after women, etc.
Many of the same types of figures return in his series. Sanderson often first made a figure without clothes, who then came with clothes for different eras in several series. This way of working, where the same basic figure was always used, explains the enormous production in the 70s and 80s. The basic figure without clothes also served as part of his extensive Roman orgy series.
A highlight of not only his work but also of the model figures of the 70s are called his Isandhlwana figures. The battle between the English army and the Zulus in Southern Africa. Figures, commissioned by Hinchliffe, which were extremely suitable for making dioramas. A large diorama with these figures was to see in the military historical museum of London for years.

Controversial
Because of his often very sexually tinted figures and the many violence that Sanderson portrayed, he was not undisputed. He was known as a talented figure maker, but there were many who did not want nothing to do with his work. Many of his figures do not lend themselves being placed in a display cabinet. For years, his most violent and sexually-oriented figures were literally sold under the counter. At the Toy Soldiers Fair in London some traders only wanted to show them behind the scenes. Nowadays, this is different with the internet, but parts of the Sanderson figures are still taped off at various sites.

Not completely forgotten
It is unknown how it went with Sanderson. He modelled his figures in addition to his daily work as a personnel officer at a publishing house. He does not seem to have had much commercial talent to put his figures on the market himself. His sales activities under his own name quickly became stranded. After his success with the Isandhlwana figures it became quieter and somewhere in the 90's Sanderson must have died. Nothing can be found about his whereabouts.
The moulds are now spread all over the world. A part remained in England, part went to the US (where they were still published under the name Cameo for a long time) and a large part went to Australia (still there under the name Fleurbaix).
On the internet, good prices are often offered for original Sanderson figures. Most of the work that is offered concerns later copies (forms made from originals) that are sometimes sold as original. Too bad, but it does indicate that the work of Sanderson is not completely forgotten and still has value for a limited group of collectors.
List of Sanderson series
In addition to the series below, Sanderson has also made many separate figures of soldiers from various different periods. This is certainly not a complete list. In total it must involve several hundred figures.
1 Camp followers (11 of 12 figures).
2 1001 Arabian nights (16 figures).
3 Roman slavemarket
4 Roman palace orgy (20-30 figures)
5 Sack of by the Goths
6 Pirates of
7 harrying the Saxons
8 Taverne figures
9 Press Gang
10 Victorian civilians
11 Pan serie (= Nymphs and satyrs) 14 figures
12 Stygia (underworld figures, differs from the Fantasy)
13 Fantasy figures (= with Wulffs heads)
14 Rufus figures (very erotic series).
15 Woodland fantasies (cobolts and women),
16 Zulu War  (24th British infantry and Zulus)
17 Girls in 75mm of 80mm
18 Hitler c.s in 80mm
19 Laurel and Hardy cameo series
20 Gladiator series
21 American colonist series
22 American civil war series 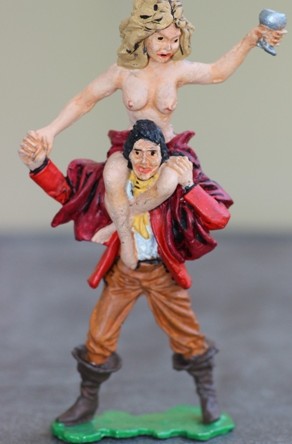