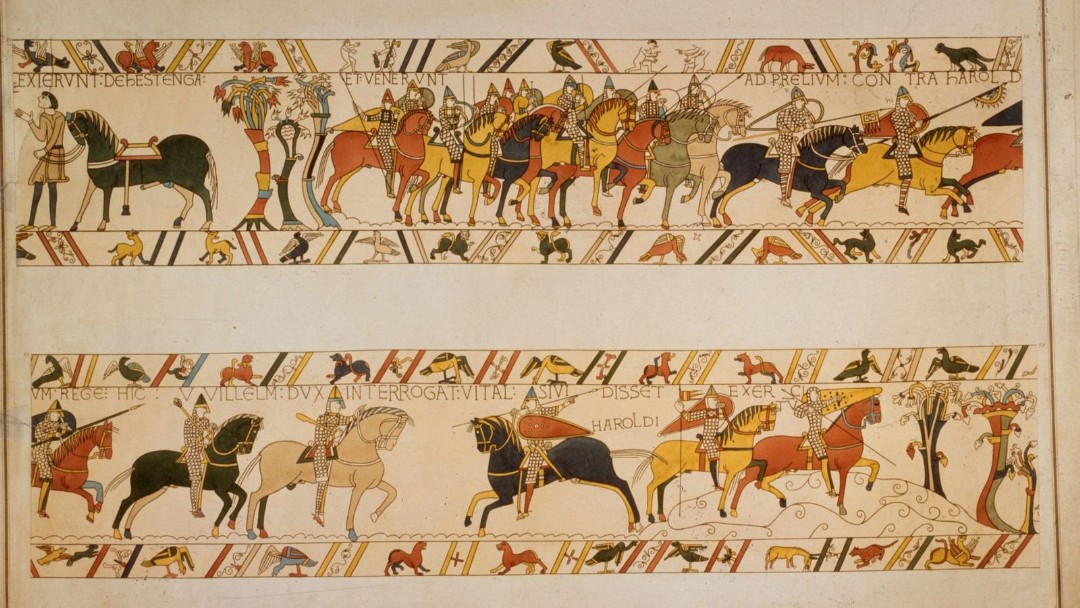 Matilda of Flanders (French: Mathilde; Dutch: Machteld) (c. 1031 – 2 November 1083) was Queen of England and Duchess of Normandy by marriage to William the Conqueror, and sometime Regent of these realms during his absence. She was the mother of ten children who survived to adulthood, including two kings, William II and Henry I.
As a niece and granddaughter of kings of France, Matilda was of grander birth than William, who was illegitimate, and, according to some suspiciously romantic tales, she initially refused his proposal on this account. Her descent from the Anglo-Saxon royal House of Wessex was also to become a useful card. Like many royal marriages of the period, it breached the rules of consanguinity, then at their most restrictive (to seven generations or degrees of relatedness); Matilda and William were third-cousins, once removed. She was about 20 when they married in 1051/2; William was some four years older, and had been Duke of Normandy since he was about eight (in 1035).
The marriage appears to have been successful, and William is not recorded to have had any bastards. Matilda was about 35, and had already borne most of her children, when William embarked on the Norman conquest of England, sailing in his flagship Mora, which Matilda had given him. She governed the Duchy of Normandy in his absence, joining him in England only after more than a year, and subsequently returning to Normandy, where she spent most of the remainder of her life, while William was mostly in his new kingdom. She was about 52 when she died in Normandy in 1083. 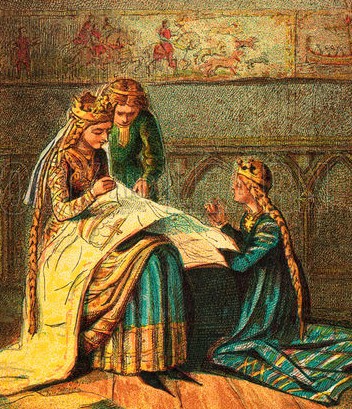 Miniature about a legend: the Tapestry of Bayeux
The story goes that Matilda took the initiative to make the famous Bayeux Tapestry. It tells the story of the conquest of England by her husband.
It is probably only a legend, but interesting for us to portray it in a 70mm flat figure. As far as we can see this is the only figure that depicts Matilda.
The Bayeux Tapestry is nearly 70 metres (230 ft) long and 50 centimetres (20 in) tall which depicts the events leading up to the Norman conquest of England  It is thought to date to the 11th century, within a few years after the battle. It tells the story from the point of view of the conquering Normans, but is now agreed to have been made in England.
The cloth consists of some seventy scenes, embroidered on linen with coloured woollen yarns. It is likely that it was commissioned by Bishop Odo, William's half-brother, and made in England—not Bayeux—in the 1070s. In 1729 the hanging was rediscovered by scholars at a time when it was being displayed annually in Bayeux Cathedral. The tapestry is now exhibited at the Musée de la Tapisserie de Bayeux in Bayeux, Normandy, France 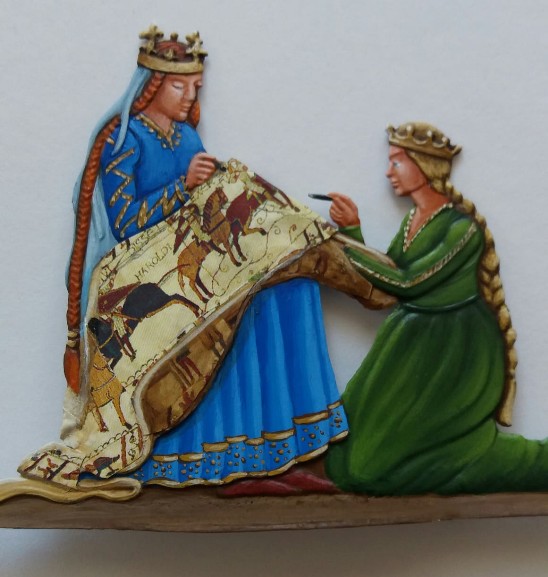