×
Go to content
×
Mata Hari
Celebrated dancer, failed spy
Mata Hari came to the world as Margaretha Zelle on 7 August 1876 in Leeuwarden. Her parents were reasonably well-off and Margaratha enjoyed a pleasant life and good education until she was 13 years old. On that age her father's company went bankrupt, and her parents' marriage went wrong. Shortly thereafter her mother also died. She moved to Amsterdam and Leiden to follow a training for kindergarten teacher, but that was no success.

Marriage and to the Dutch Indies
When she was 18, Margaret responded to a contact ad in a newspaper of a Dutch officer. Already after a few months she married this 20-years older Rudolph Mc.leod in 1895. In 1897 their son was born and a few months later the family left for the Dutch East Indies. The image of an unhappy marriage emerges from various sources. McLeod would not be too easy, but that probably also applies to Margaretha. In 1898 they get a daughter, a year later the son dies. In this period Margaretha would have come into contact with oriental dances and she would also have been a member of a dance group. After the retirement of Macleod in 1900, they settled in Sindanglaja, a remote, quiet and far from fashionable city. Margaret does not care here, she wants to get away at any cost. Eventually they decided to go back to the Netherlands in 1902. 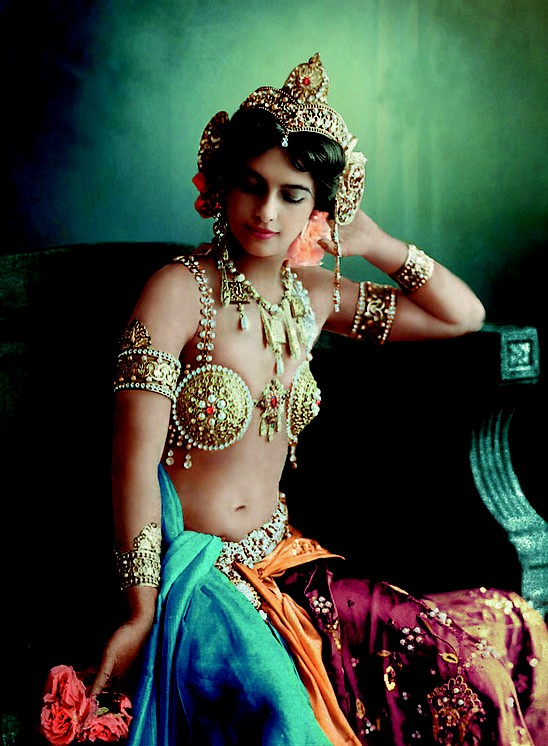 Triumphs as a dancer
In the Netherlands, it soon became clear that the pension of MacLeod was not enough to lead a reasonably luxurious life. The tensions of the couple rose high and in 1902 the divorce was pronounced. The daughter stays with MacLeod and Margaret leaves for Paris shortly afterwards without any possessions. Paris because, according to her, all divorced women go there. A first stay fails and she returns to the Netherlands to try her luck again a year later. In 1905 she performs her so called snake dance several times in a pub. As a result, she was noticed and invited to perform her dance in one of the prestigious salons in Paris. And then things go fast. She may perform her act in the museum of large industrial, mr. Guimet.  He advises her to take a stage name. That is Mata Hari (Malay for the eye of the day, or the sun).
From that moment on Mata Hari celebrates triumphs with her largely self-made Oriental dances. It is mainly the higher class that comes to see her. Everything that is 'Oriental' is seen as very fashionable those das  in Paris's better circles. Her performances are dances with veils that are thrown one by one. No newspaper in France that does not publish extensive stories and interviews from her. You could call her a popular pop artist for that time. But she did not sing only undressed herself while dancing.
In her interviews she creates her own fantasy world. In one interview she is of Indonesian origin, in another from Indian nobility and priestess in temples. She also 'sells' her dances as holy dances that would only be known to a very small group of initiates.
She earns large amounts of money through her dancing. However, she also receives quite a bit of income from all kinds of gentlemen who would like to be seen with her. Her fame goes over the borders and she performs in Italy, Spain and Austria.
Just before her first performance in Berlin the 1st World War breaks out. A war that puts an end to the old world, including that in which Mata Hari triumphed. She has to leave Germany headlong and without any possessions she arrives in the Netherlands.

1:10 Bust made by Ulrich Puchala

Spying
This is the start of a difficult period for Mata Hari. The world has something different to do than to watch a dancer. In the Netherlands she does not feel at home anymore and she does anything to leave for France where all her belongings were.
For money and distraction she starts a relationship with a Dutch banker and also contact an old Dutch lover of her. In this way she becomes popular in the higer society of The Hague.
It is probably during this period that the German consul asks her to spy for Germany. She gets the code name H21 and the not insignificant amount of 20,000 euros. Money that she can use well. From that moment on she also  is notced by the British secret service. By one of her journeys by boat she is arrested in an English harbour and questioned by the English who, however, let her go again.
She also comes into contact with the French secret services. She suggests to work for the French in a role as doublespy. It is unclear whether this has ever really been effected. However, Mata Hari would have passed on some information about the Germans to the French. It seems that she saw the entire spy story as a sort of game, which also provided her with additional income. Whether she saw danger in it is doubtful.
Anyway, the Germans see her as their spy and this is confirmed for the French when they intercept a telegram from Madrid to Berlin. It leads to her arrest on February 13, 1917. She has been living in Paris for some time, where she carelessly picked up her old life again.
The interrogations by the French secret service are starting pretty quickly. From the reports it can be seen that Mata Hari is especially surprised and is not aware of any harm. Until the very last moment, as also appears from her last letters, she is convinced that it will all end with a hiss. However, it does not. From the recently released French reports, only one real conclusion can be drawn: Mata Hari was guilty in the eyes of the main interrogator from the beginning and had to be convicted. There are historians who mainly see a political move: the French army was in a very bad state and politically it was good to blame foreign spies. Even a celebrity, a foreigner like Mata Hari was not to be trusted ... Anyway, the conviction soon followed and in the morning of October 15, 1917, Mata Hari was executed.
The legend
Mata Hari was a spy, so much is clear. But of a very amateurish kind and the chance that she has only once delivered meaningful secret information to one of the warring parties is extremely small. Her role probably suited herself well in a kind of fantasy world where importance, attention and luxury life were the main ingredients. Partly for this reason, after her death she became the model of the femme fatale who used her charms as a spy for sealing secrets. Grossly exaggerated but especially good for the many books and films that can still count on much interest to this day.
Back to content