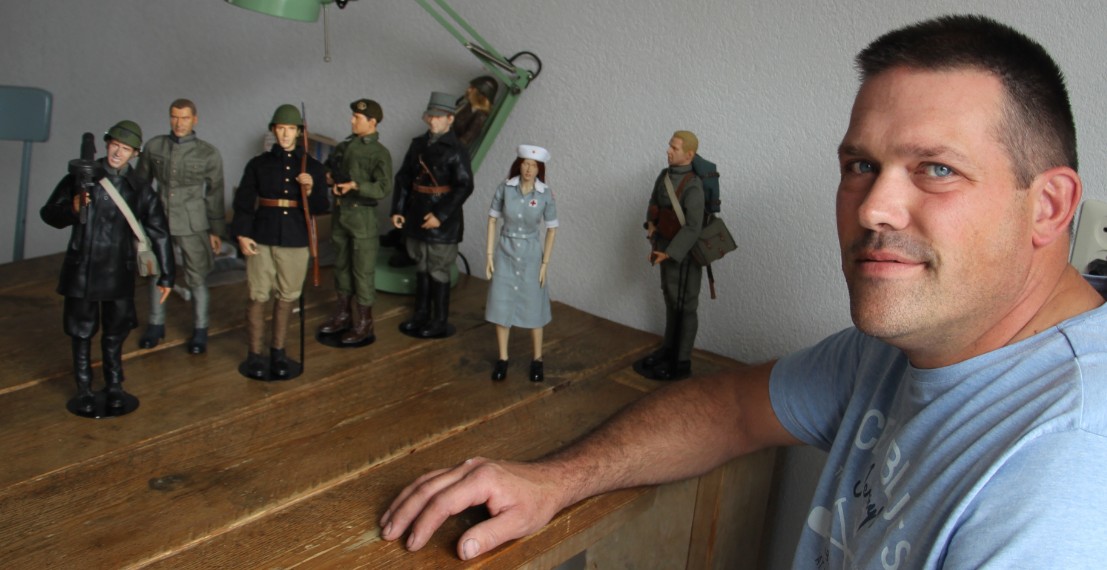 The hobby of model figures is broad and is expanding more and more. A fairly new development is the collection of very realistic large figures in the scale 1/6. We spoke with Jan-Cees Grinwis from Ouddorp, the Netherlands, who devoted himself entirely to these large figures. He specializes in the Dutch uniforms of the May days of 1940. A hobby that involves a lot of manual work.
Forty years ago Jan-Cees assembled his first model kits. That would continue for years until about ten years ago a call was made to excavate a bunker from the Second World War in Ouddorp. Jan-Cees helped as a volunteer. After the work was completed, a cannon that had once stood there in the war was exhibited in scale 1/6. There was still a lot missing and since Jan-Cees as an auto mechanic  supplied a number of self-made crates with ammunition. It was the start of a hobby in which a lot of time and above all a lot of fun went.
Dutch soldiers
During a miniatures fair, Jan-Cees met with someone who was very interested in the 1/6 munition crates and advised him to go to the action figurado. An annual fair in Duiven where collectors from all over Europe come together to see and buy larger miniatures. There was a lot but the Dutch army was missing completely. Together with co-collector Bob Draayer, whom he had met, the decision was taken: making uniforms and equipment for the Dutch army of the mobilization period, 1940.
The miniatures, also called dolls, are supplied by all kinds of different companies. The most famous are those of Dragon. Often with lively 'heads' and Jan-Cees started to make the uniforms and equipment. The head of an existing figure often determines which uniform it will be. A head with a cheeky appearance belongs to a motorcyclist, a tough head of course to a commando and so on.
Manual work
Certain belts, daggers, bags are quite common and can be used after some minor changes. However, the more precise you look, the greater the differences. Take, for example, the Dutch helmet from the May 1940 days. There was nothing at scale 1/6 that looked like it. After making a master of plastic, a mold of silicone was made and the helmets could be cast in resin. Also after a lot of problems with the emblem of the Dutch lion in front of the helmet. The result, however, is impressive (see photo). The same applies to the rifles, daggers, field bottles and other equipment that were specifically used by the Dutch army. First of all, a muold is made and then they are cast in resin or in tin.
The clothing is something else. Sometimes parts of an existing 1/6 uniform can be used, but in general it has to be made entirely. Everything as real and realistic as possible. A bag has the same possibilities (for example, to attach a belt) as the real ones, buttons are sewn and also collars and covers stitched. Of course that takes a lot of time. One uniform costs about a month of free time.
Museum quality
The requirements that Jan-Cees claims to make as real as possible are high. At first he sometimes glued a strap on a bag. That is, however, a thing of the past. Each belt is now stitched, just like in real life. He would also like to see the fibers of the clothing in scale. That entails quite a bit of searching  and sometimes a large piece of fabric or leather has to be bought for one small part. Parts are also made from other products. Nobody will recognize the original wallet in small a leather bag.
It also means that a lot of research is needed before the final work can be started. Many books, photos and of course the internet are unravelled before actually starting a new uniform.
The detailing and realism of these figures can rightly be called museum quality. Until now, the figures were temporarily exhibited in a local museum in connection with an exhibition about the Second World War. They made quite an impression on the visitors there.