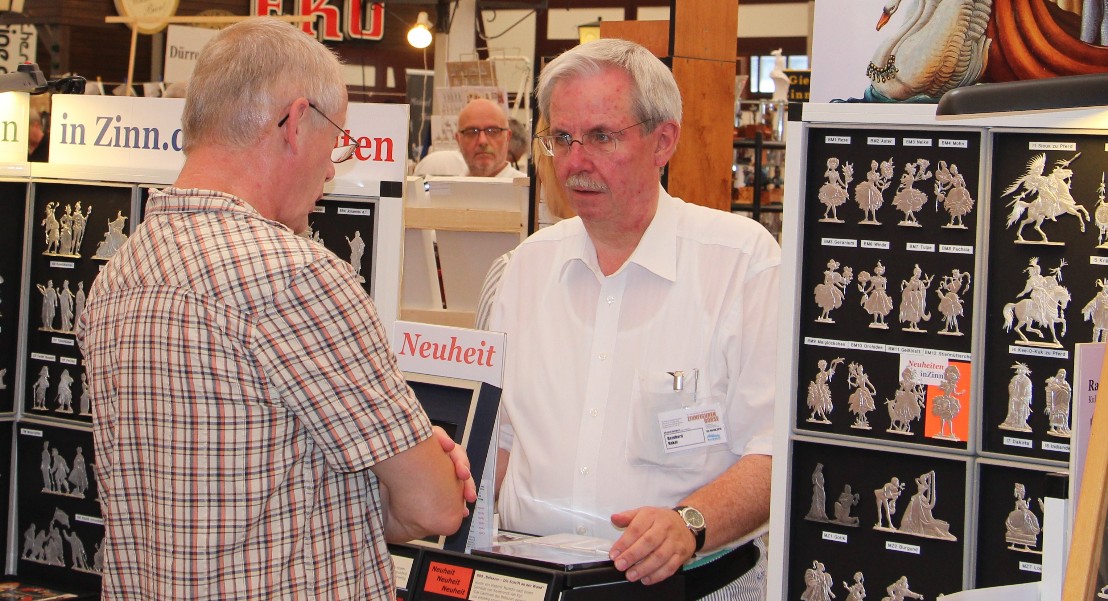 Flat miniatures are still being made. The flat miniature is becoming more popular again. It is no longer so much the 30mm 'tin soldier' ​​but much more about larger, often very detailed show figures. Inzinn from Germany is an example of a private publisher who has released a large number of these  often very nice miniatures in recent years. We spoke with the owner, Bernhard Bakat.
How and when did Inzinn begin?
In 2007, during the exhibition in Kulmbach I started with three own figures. That was the beginning of Inzinn.
Since when did you become interested in tin figures yourself and are you also professionally involved?
In 1985 I actually became interested in tin figures for the first time. I was looking for a new creative hobby. After a visit to a major train exhibition in Nuremberg, I visited Kulmbach and the Plassenburg with my wife on the way home. There I saw the large supply of tin figures. I also bought my first 30mm flat figures (the Kulmbacher exhibition series 1975). Professionally, I do not have any involvement with the tin figure.
After this start, I wanted to learn how to paint the figures as well. I also learned that in Kulmbach. And later, the desire arose, as with many collectors, to also issue personal figures.
What kind of flat figures does Inzinn sell?
It mainly concerns show figures with a size from 45mm. That is the wish of the painter, where I notice that my own eyes are deteriorating as well. This size offers many possibilities for detailing and own creativity. Meanwhile, there are more than 100 different showcase figures.
How does a new figure arise?
First of course there must be an idea. Usually you have a somewhat vague idea that becomes more and more concrete. But sometimes it also happens that you immediately have a click and everything is actually ready as an idea. That is always exciting.
After the idea is complete, the manual work begins: drawing, engraving, casting. For this you search  the right artists in the hope that they accept the assignment and carry out the idea. So far I have always been very satisfied with the results and for that I can only be grateful to the artists. Especially those who then convert the white figure into a painted version.
What does the market for flat figures look like at the moment?
That is a difficult question. The flat pewter figures have long ceased to be toys, but only a collector's item. A more artistic conception of the flat tin figure has definitely become more prominent. On the other hand, there are also demographic developments. We are all getting older and there are few young collectors. Something that everyone in this area will confirm. But on the other hand, the interest in the flat figure, especially in the new coming out, is still great. In my opinion, the trend that the flat figure develops into the larger showcase figure offers good opportunities. That was also on display at the tin figurine fair in Kulmbach and the painting competition of this year.
Do you own a favourite series?
Yes, it is logical that I also have favourites. In the first instance, the figures that are created on the basis of their own ideas and in particular all figures marked with BB (Bibel in Zinn). That includes BB1, my first figure, Philips and the treasure guard from the east (acts of the apostles, 8, 26-40 ed.). Signed and engraved by Vladimir Nuzhdin.
How are your figures sold, via the internet, trade fairs?
I love the contact with the collectors, and that is why I have try to be present at all kinds of miniature fairs.  But, in the time of the internet, you obviously also use it via our own internet site.
For more information and all figures of Inzinn see the website: www.inzinn.de