×
Go to content
The History of Toy Soldiers: A Masterpiece
This extensive book, The History of Toy Soldiers was recently published by Pen and Sword. Author is the Italian collector Luigi Toiati.
When opening the book, the content is a little surprising. The subject is much broader than the title suggests. Indeed, Toy Soldiers are widely discussed, but also many other types of figures. Almost all types of miniatures are covered in 17 extensive chapters. Flat figures, model figures, paper soldiers, made of aluminium, lead, plastic, all types, sizes and materials are extensively described. That also applies to the brands, they are all there. Luigi writes just as easily about a series of Airfix figures as about the old figures from Heyde. In total, over 600 figure brands are described.
That may also be the only small negative remark about this book:  it is a huge amount of information. But the book remains legible through a clear index, including one with all the brands described. 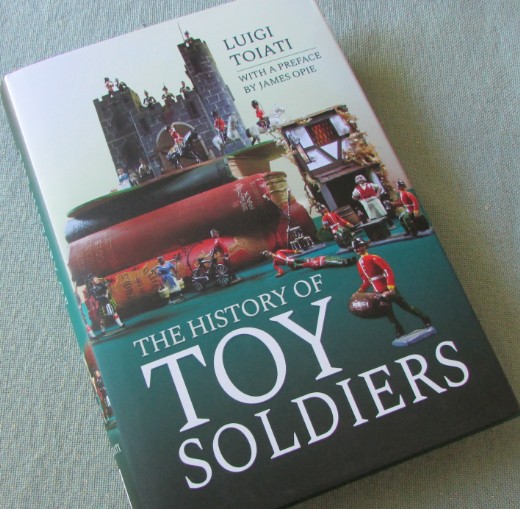 History and countries
As in several other publications about toy soldiers this one also starts with the wooden miniatures found in the tombs of the Pharaohs. However, there are also chapters on the use of miniatures in the Middle Ages and later periods.
Subsequently, the author describes the development of the miniature throughout history until recent times. From the flat figures up to the more modern 28 mm wargame figures and finally, after 500 pages, to arrive at the modern Toy Soldiers old style.
What is special is that not only the history, the type of figure and the development are described per chapter, but also the countries with the relevant brands of precisely that type of figure. Especially this shows that we are dealing with an author who really knows "everything" about his subject. An enormous amount of study must have preceded this book. Each chapter is concluded with a separate bibliography.
The chapters are interspersed with all sorts of information about, and experiences of, for example, fellow collectors.
And of course you must be able to see the figures. Hundreds of photos have been included in the book.
As stated, with over 600 pages, this is a very extensive work. Not a book to read at once. It is a reference book for not only toy soldiers but the entire world of the hobby with the  miniature "soldier". A must for the collector.